In October 2019 Embassy Concrete Pumping Ltd were asked to pump concrete over 200 meters distance in Penshurst near to Tunbridge Wells in Kent.

There was a small footbridge on the approach to about eight properties on single track road. The footbridge had less than 12 feet clearance and even a small 4 metre concrete mixer wouldn’t fit under this bridge.

Billy the owner of Loft property Ltd had considered using dumpers to get the concrete down the single track road but came to the conclusion that it would have made too much mess. There was also the cost factor to consider while the concrete trucks waited on site and the dumper would have been only able to put the concrete into the start of the footing resulting in a lot of hard work trying to drag it around the wrap around footings!

Billy tried contacting numerous concrete pumping companies but nobody was confident or interested in pumping concrete that sort of distance but eventually got in contact with us at Embassy Concrete Pumping and told us his requirements:

Embassy Concrete Pumping visited the site a few days before the planned pour date to run through the pour with Billy from Loft Property Ltd and all the necessary arrangements were put into place.

Thankfully, there was a small area just before the bridge that we could position the Schwing 20m boom pump. On this occasion there really was not much to be gained by using the boom. It was decided that we would run a pipeline from the back of the pump and just keep the pipes to the side of the road and on the grass verge.

Setting up that amount of pipeline was always going to take some time, but fortunately Embassy Pumps has some experienced and hard-working pump operators and in no time the pipeline was set up ready for the first load of concrete. 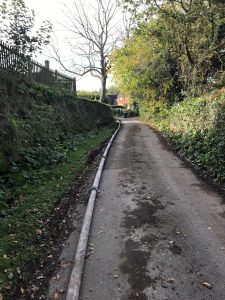 The pour wasn’t completely without it’s issues. The concrete supplier struggled to find the address which resulted in the first load being late. Also the slump of the concrete was to dry so we had to get water added in order to bring the pumping pressure down. We put 12 bags of cement in to grout the pipeline.

The concrete sailed through the line and, quite a few pumps later, the concrete was through. Obviously starting and stopping can be quite an issue on such a long pipeline run. Embassy came equipped with walkie Talkies and the linesman and the pump operator were able to communicate with each other.

The foundations took just over three loads of concrete. When we were finished pouring we put a sponge ball in the pipeline from the back of the pump. We used compressed air to push the remaining concrete in the pipeline and caught the ball at the end with a ball catcher.

All that was left to do was to tidy up the pipes and clean the clips and gaskets.

Billy at Loft Property Ltd was very happy with how the job went — another satisfied customer.

If you have any concrete pump requirements why not contact us for a competitive no obligation quote on:

Get an instant quote

Message us on WhatsApp